This week I did 7 days of a constraint-based daily practice and I interviewed my first expert, Gregory Dobler.

The main idea of a constraint-based daily practice is to challenge ourselves to explore our topic by making some kind of quick sketch or janky prototype every day for 7 days.

It happens I have 7 light sources (lamps, etc) in my apartment that partially illuminate the ceiling. It doesn't do me any good to illuminate the ceiling because I don't do anything up there. Is it possible for me to modify each light source so that I can continue to use the them without illuminating the ceiling and without inhibiting my ability to live there? Experimenting with this will help me understand how much of an impact proper lighting design can have on reducing light sources that emit light skyward and contribute to light pollution.

To be scientific I used a light meter app installed on my phone to take before and after illumination measurements. Illuminance is a measure of how much light is illuminating a surface. All measurements are in Lux (lx), with 10 lx equal to 1 foot-candle. One foot-candle is the illumination provided by 1 candle on a surface 1 foot way.

Every other light source in my apartment was turned off while taking any measurements. All lights were modified using cardboard, packing tape and masking tape. All modifications were extremely janky.

My first light source is a standing lamp in my bedroom with a 100 Watt incandescent bulb. The lamp illuminates the ceiling above it at 34 lx and is reduced to 4 lx with the modifications. This modification took quite a bit of time because it was my first one. 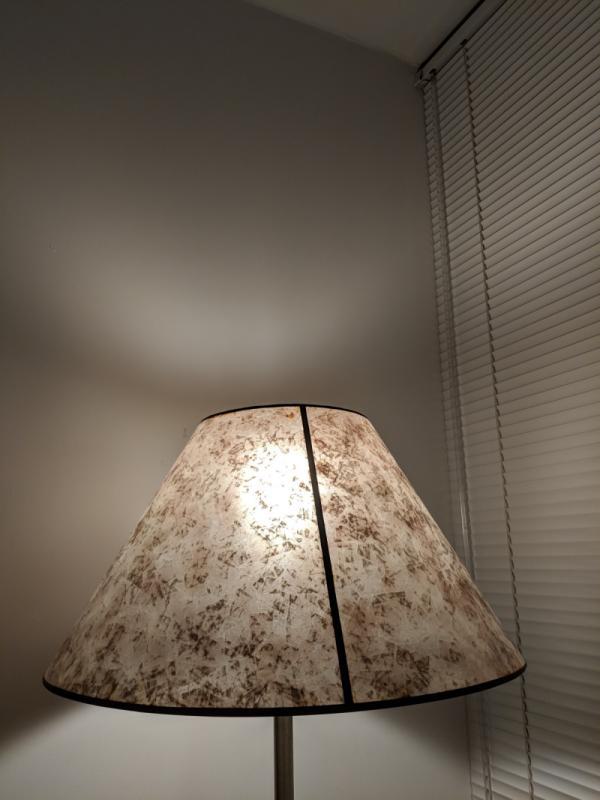 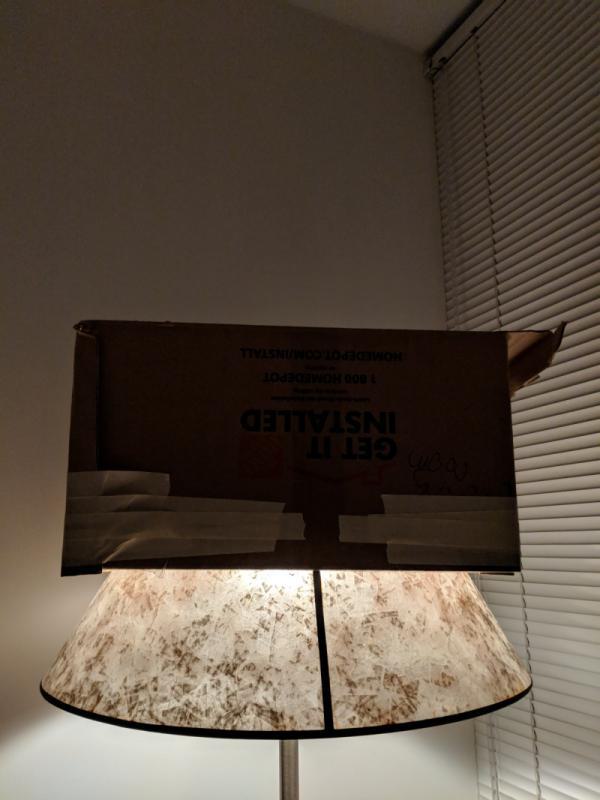 The second light source is what I believe to be a LED light with plastic cover on the ceiling near my front door. For this light I measured the illumination of the ceiling around the outside of the lamp about 6-12 inches away. The previous ceiling illumination of 70 lx was reduced to 8 lx.

This was the most difficult because I had to securely tape cardboard to the ceiling with masking tape. 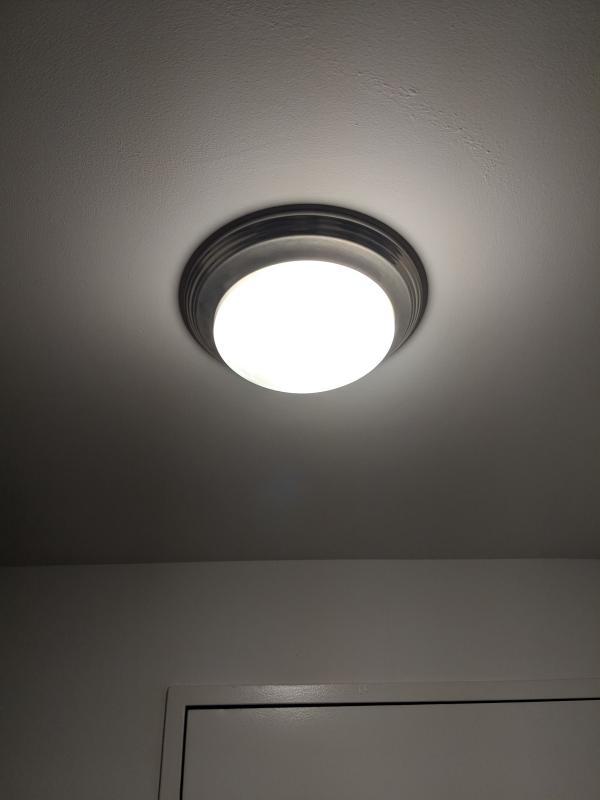 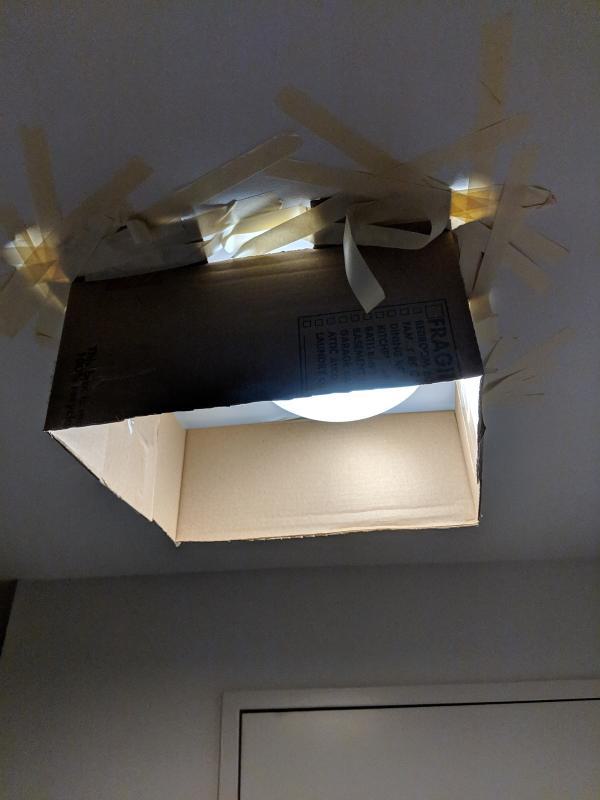 The third light source is a 70 Watt incandescent bulb in my bedroom. The ceiling illumination was previously 36 lx and was reduced to 4 lx with the modifications. 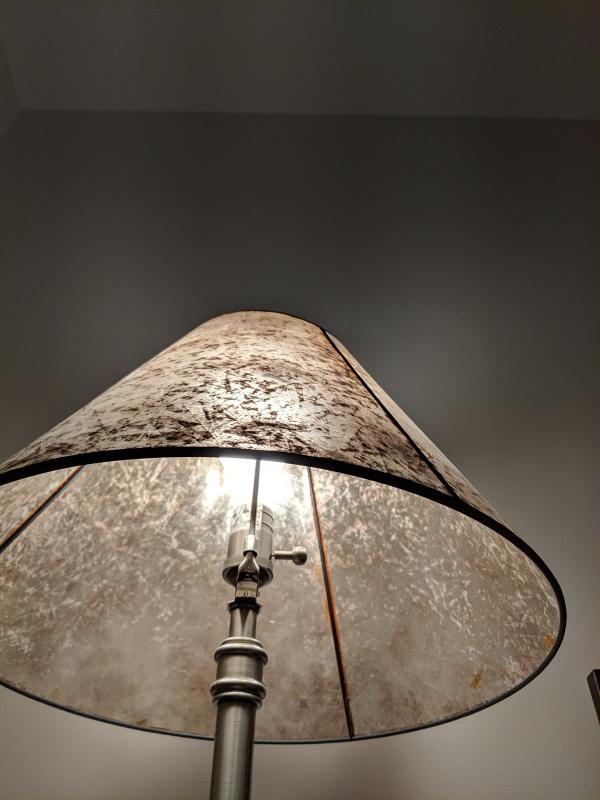 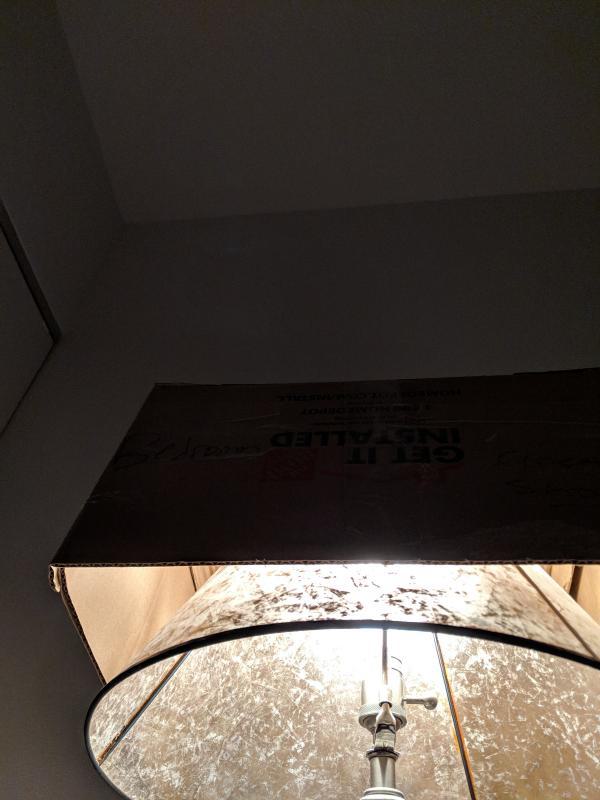 The fourth light source is the fluorescent lighting in my bathroom. This light illuminates the ceiling at 788 lx. With a simple cardboard cover I was able to reduce that to 46 lx. 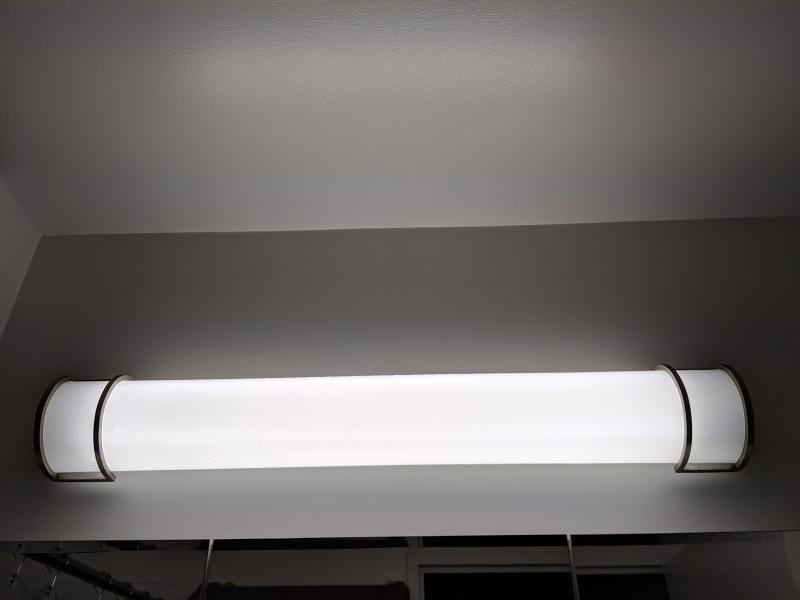 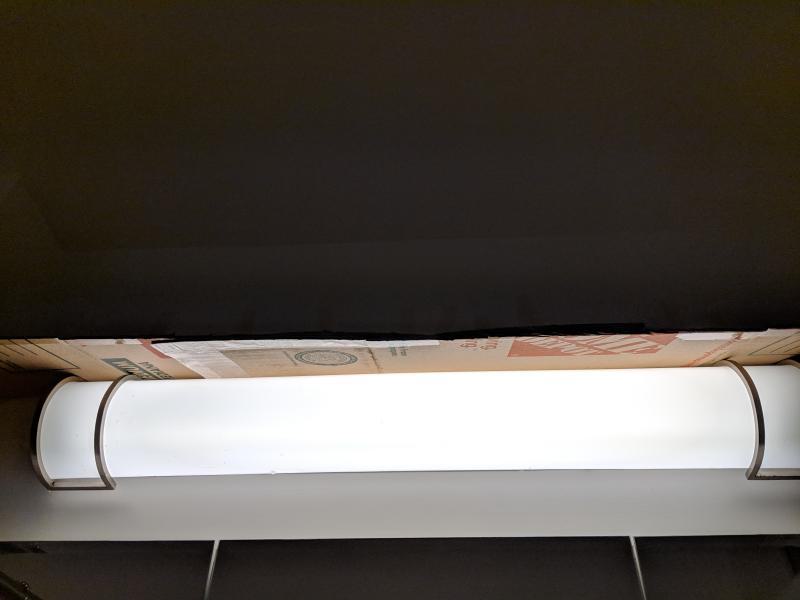 Unfortunately this modification fell down after a day or two. I made a second modification for it on day 6. This modified light illuminated the ceiling at 73 lx. 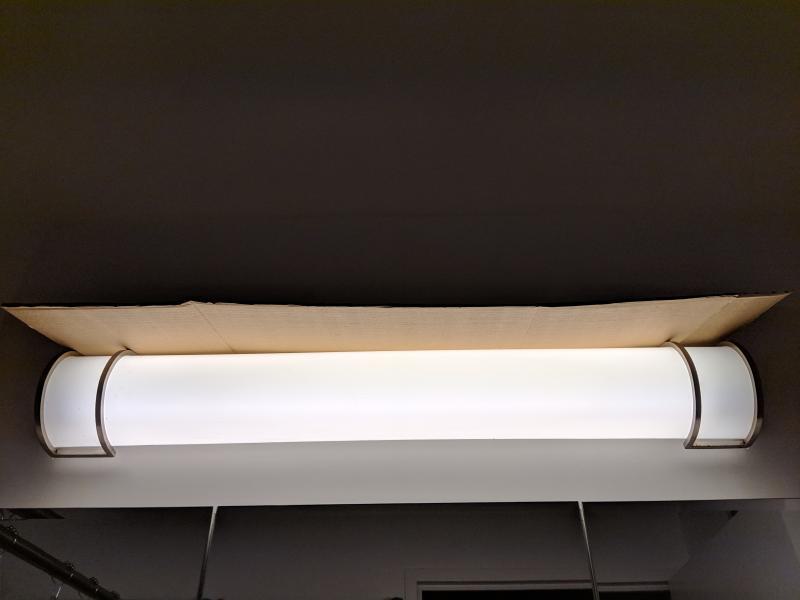 The fifth light source is a 100 Watt incandescent bulb in my living room. This is a lamp I made myself out of an empty olive bottle several years ago as part of an ITP Camp project. The lamp illuminates the ceiling at 34 lx, but with the modifications, 3 lx. 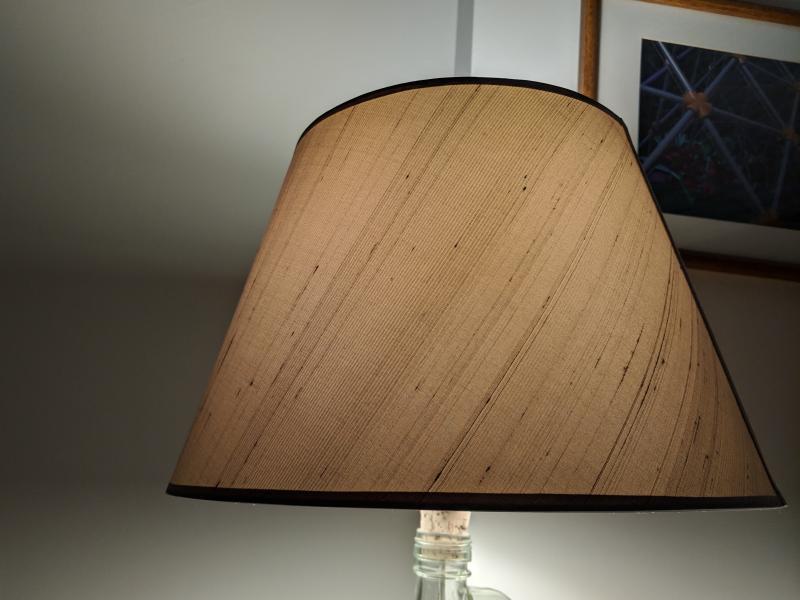 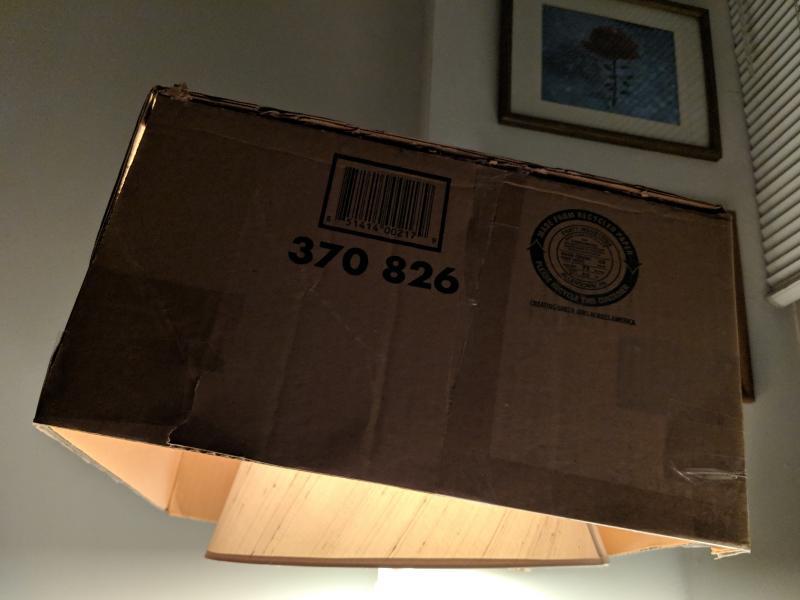 The sixth light source is fluorescent lighting on the ceiling of my kitchen. The illumination of the ceiling 6-12 inches away from the light was 110 lx before the modification and 19 lx after. 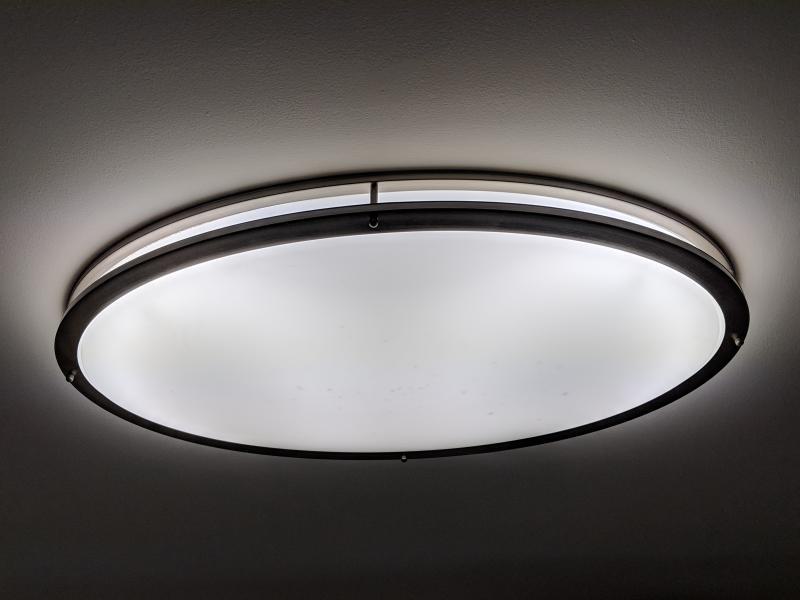 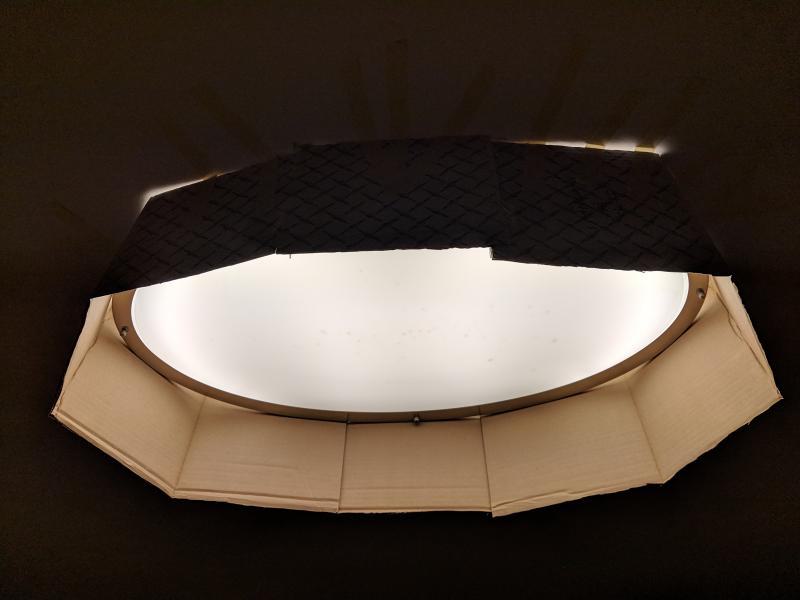 The seventh and final light source is a 60 Watt incandescent bulb sitting on my desk. The illumination above the lamp was 28 lx before the modification and 11 lx after. 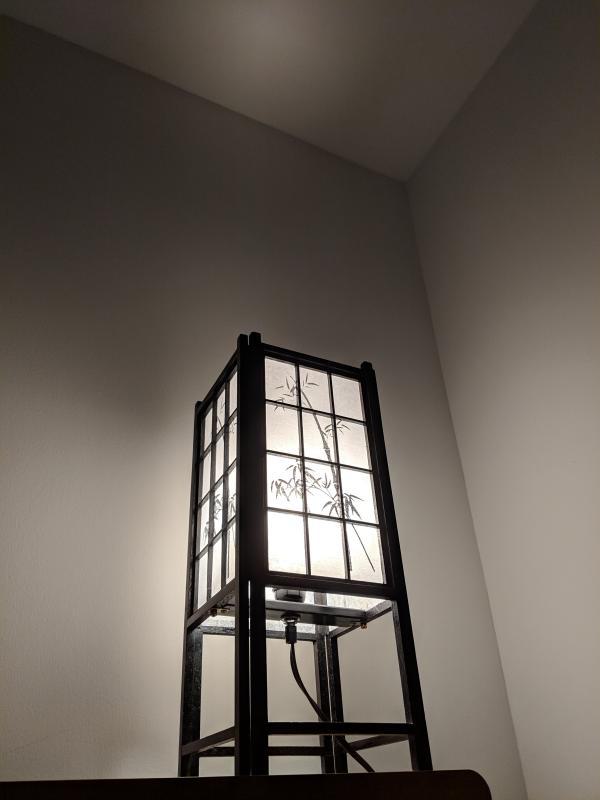 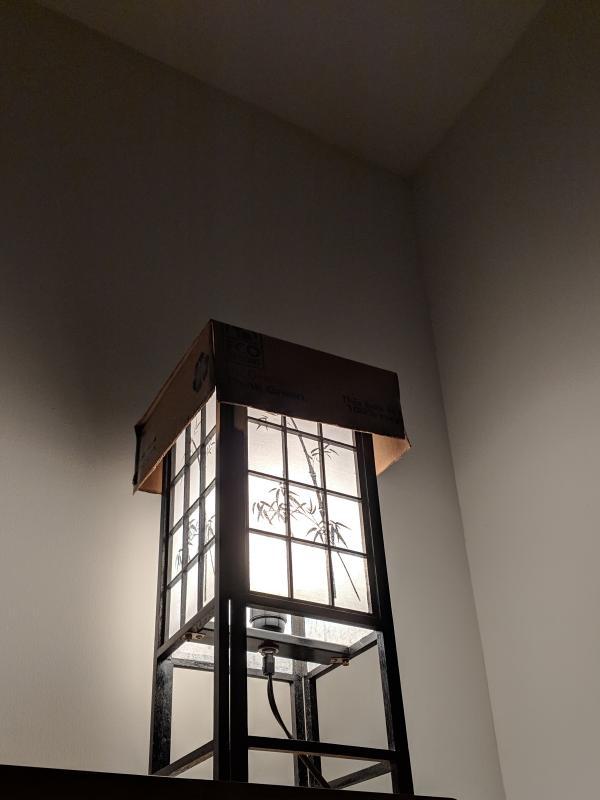 All of the modified light fixtures remained modified for the remainder of the 7 day period. None of them prevented me from living my life in my apartment and none were more than a minor inconvenience. It really was a non-issue.

For all but one light I was able to reduce the ceiling illumination by at least 80-90%. This is encouraging and is more than I expected. It suggests that proper design of outdoor lighting can significantly reduce a light source's contribution to light pollution without a lot of effort.

This past week I met with Gregory Dobler, an astrophysicist and data scientist working in NYU's Center for Urban Science and Progress. He is the director of the Urban Observatory that is collecting detailed light measurements from NYC light sources. His team analyzes the data in similar ways to what an astrophysicist would do with celestial observations.

Here are some highlights from that conversation.

This was a great conversation and I am grateful for his time. I now have many new ideas for further research. In addition, there is one clear leverage point that must be addressed if my project is to bring about any kind of actual change. Light Pollution is not seen as a real problem, and until that changes, no progress will be made reducing light pollution. Of course humankind has a reputation for ignoring real problems, but getting people to at least recognize light pollution as an actual problem is still going to be a necessary first step.