Laura Owens is a contemporary American painter. Sometimes criticized for being overly cheerful[2], her large and colorful paintings combining multiple techniques do seem whimsical at first but upon closer reflection communicate a deeper thoughtfulness and emotion.

One of Owen’s works that struck me as particularly intriguing is her untitled piece derived from old newspaper plates she found under the shingle siding of her home[1,3]. The piece looks like a collage that started with the front page of a Sunday newspaper, and was actually made with Adobe Photoshop along with oil paint and screen printing. Owens made several similar pieces and one of them was on display at the Whitney. 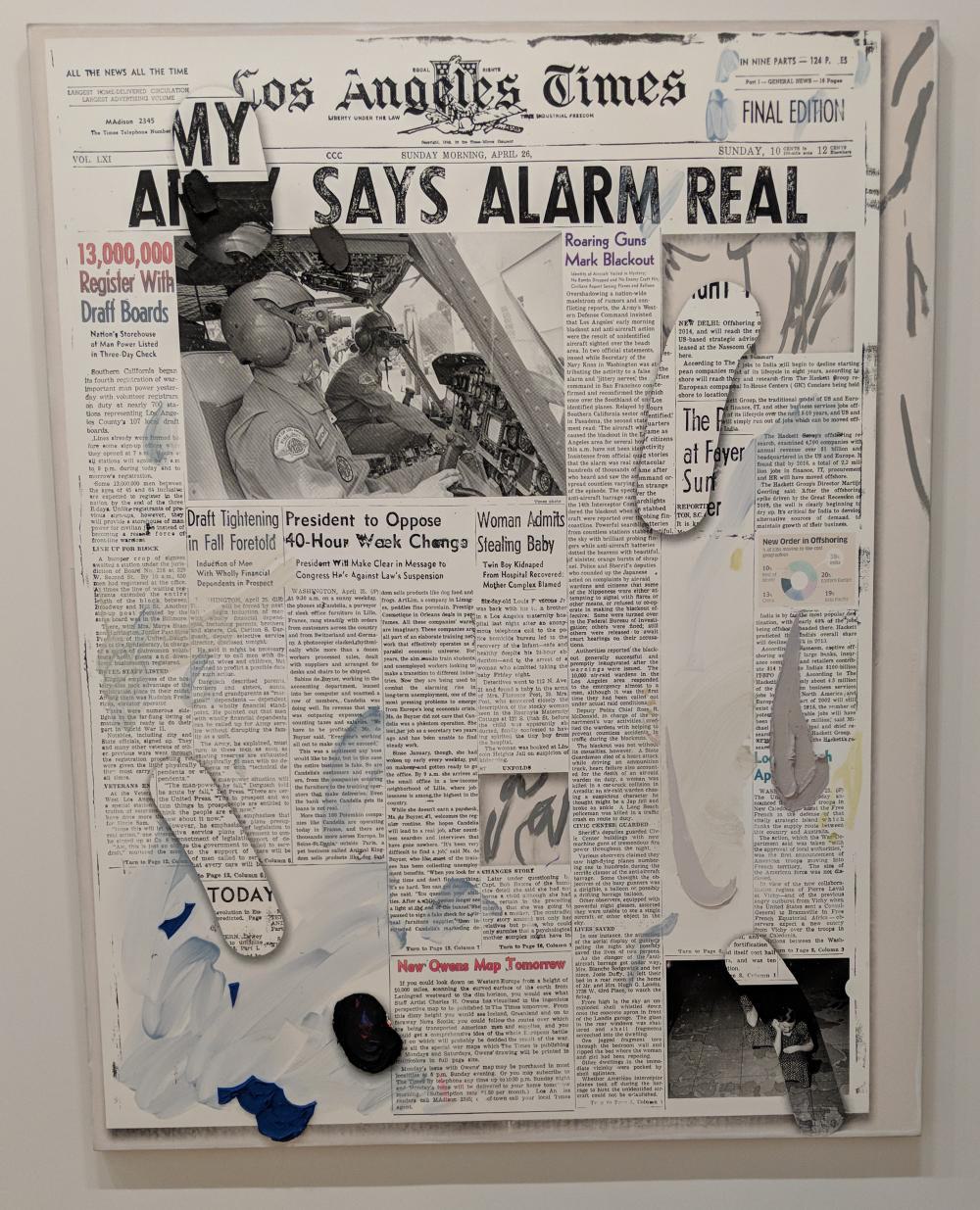 While looking at the newspaper piece I found myself reading the news stories and wondering why she selected this particular page to be included. It is clear her own emotional reaction to the words is reflected in the piece. One news story reports on a government imposed blackout in response to unidentified aircraft seen off the coast of California. A highlighted paragraph, painted differently from the others, tells of citizens accusing the “Nipponese” of attempting to undermine the effectiveness of the blackout and their resulting arrest. The piece uses color to highlight the title of an article telling of artist Charles H. Owens (no known relation), a well-known painter at the time whose work depicting events of the war was published weekly in the newspaper. The piece also uses color to highlight an article about the expanding draft registrations.

Owen’s other works include a set of large canvases mounted upright in the middle of the floor. The paintings as a group tell part of a story about the destruction of earth written by her then 9 year-old son and can be read by standing in a particular location on the gallery floor. Drawings by her son can be seen on the opposite side of the canvases. Another set of works using wallpaper are pieces of what was once a single unified work studying walls and wallpaper that previously contained other paintings inside[5].

Laura Owen’s creative work has a unique style that at first glance might seem overly cheerful or whimsical but is actually complex and thought-provoking. Her untitled pieces depicting newspapers, stories by her son, or studies of wallpaper all have subtleties that point to sophistication and cleverness. It is clear that her art is deep and emotional and that she is an impressive artist.