I am continuing to do research on Light Pollution and am learning a lot more about this field.

I met with Margaret this week. Definitely good use of my time. In addition to helping me research light pollution she gave me good advice for the research I am doing for my Redefinition of Art class.

The biggest problem I have right now is sorting through all the information and narrowing my scope. I know from my meeting with Gregory Dobler that the subject of light pollution can be subdivided into four subtopics:

Of these four, the first most strongly resonates with me. I'm going to narrow my research focus to pursue this subtopic.

I found this week's reading Design Fiction to be thought provoking. This "short essay on design, science, fact, and fiction" was actually quite lengthy and provided detailed thoughts on how actual real science has influenced science fiction or general fiction and how the design of fictional movies or stories has influenced scientific progress and our reality. For example, Stanley Kubrick consulted with dozens of science and technology experts to make a film that thoughtfully predicts what future space travel will be like. Another example cited in the reading discussed the ways the movie Minority Report inspires human-computer interfaces.

Something not mentioned in the reading but absolutely should have been is how the movie WarGames prompted Ronald Reagan to bring about significant changes to government computer security. That work along with other science fiction works also motivated him to work to de-escalate the cold war and avoid WWW III.

This alone is evidence that design decisions and art can have a significant and positive influence on the world. One has to wonder if one could get similar results with our current president. Unfortunately he either can't or won't read and there is speculation that he may be partially illiterate. Any attempted interventions would need to consider the reading level of the intended audience.

Making Art by Taking Light Away

In last week's class we met in small groups to discuss our 7 days of Constraint-Based Daily Practice. During the feedback for my work someone mentioned the idea of making art with light by taking it away. The idea is intriguing and I would like to explore it further. There are many artists whose artistic expression involves using light to illuminate objects in a way that is meaningful or has aesthetic appeal. We even have a Light Art Club at ITP. But what about creating art with darkness?

The idea reminded me of a British artist who makes art by cleaning dirty walls. Because of him there is a Reverse Graffiti movement in San Francisco. The works make a powerful statement about pollution and the changes we are making to our environment.

How could one create art by taking light away? First I need to consider all the actions through which light can be taken away. Here are some ideas:

Those are pretty broad. The idea that is resonating with me right now is the idea of creating sculptures or installations of some kind with screens that cast specific shadows onto the ground. The installation can be designed in such a way to cast a specific shadow based on analysis of the lighting available at some location. I'm not sure how that could work but that's the idea I have right now.

Three former ITP students Rozit Arditi, Adrià Navarro López, and Engin Ayaz built an installation related to light pollution that used park illumination to show people what the stars are supposed to look like. I am going to contact them to learn more about their project.

It would be an interesting output for this class if I were to develop a design concept of some kind that addressed light pollution.

Who would the "public" be for a project like this? The general population of city dwellers? City officials? Lighting manufacturers?

To explore this I tried making a poster on the subject of light pollution. It is intentionally austere. I made the poster narrow to motivate the viewer to consider the void in-between the text at the top and the buildings at the bottom. In the void are two stars, far less than the stars one is supposed to see in the night sky. 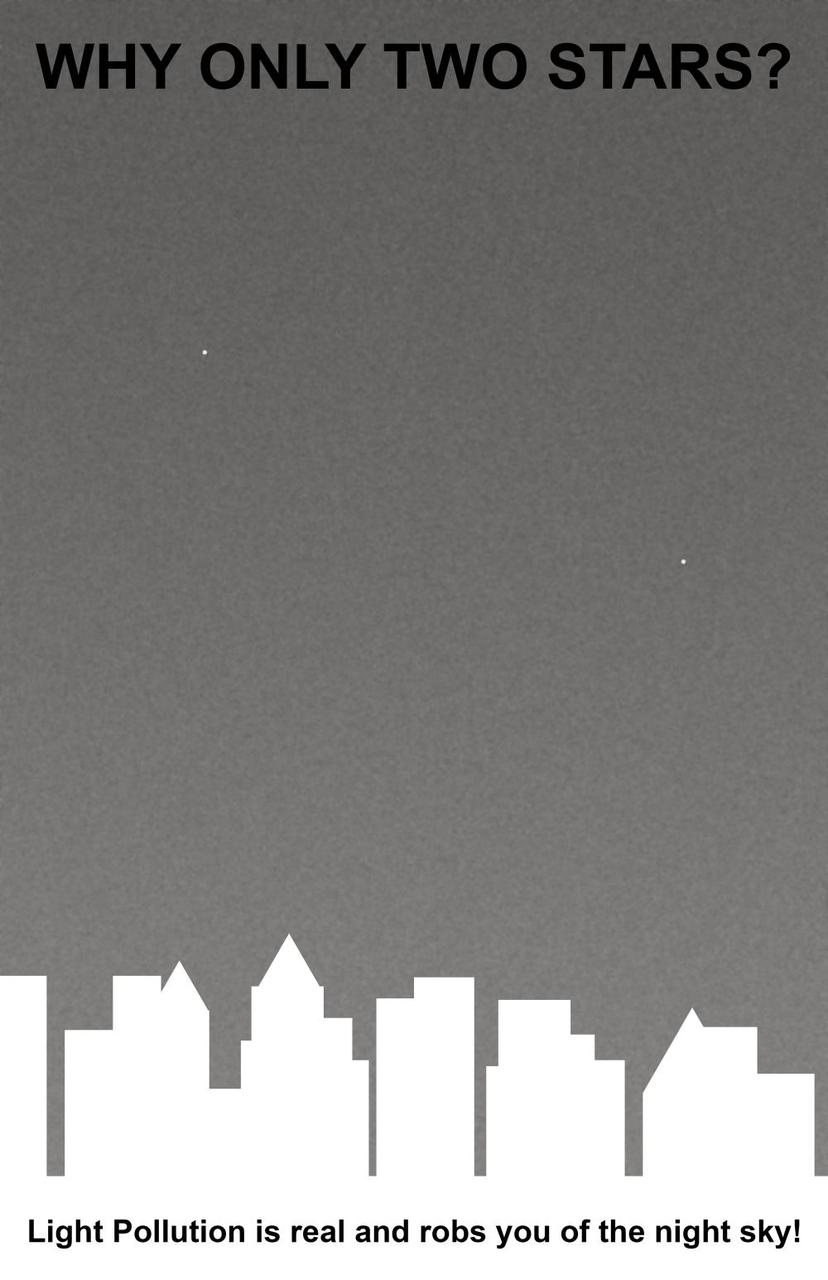 My audience for this poster would be environmentally conscious city dwellers. I think that this group would be the most curious about light pollution and the impact it is having on our night sky. This group would probably be the "public" I would want to target with an art installation that makes art with light by taking it away.