First, I started with some sketches. My drawings of a tesseract are terrible because they are almost impossible to visualize. It is easier to think about them after doing the math, but even then, it is not easy drawing a 4D object on a 2D piece of paper.

A rotating tesseract will repeat itself after a 90 degree rotation. Also, there is symmetry in that rotations between 45 and 90 degrees are mirror images of rotations between 0 and 45 degrees. I can simplify my workload by considering this in my design. 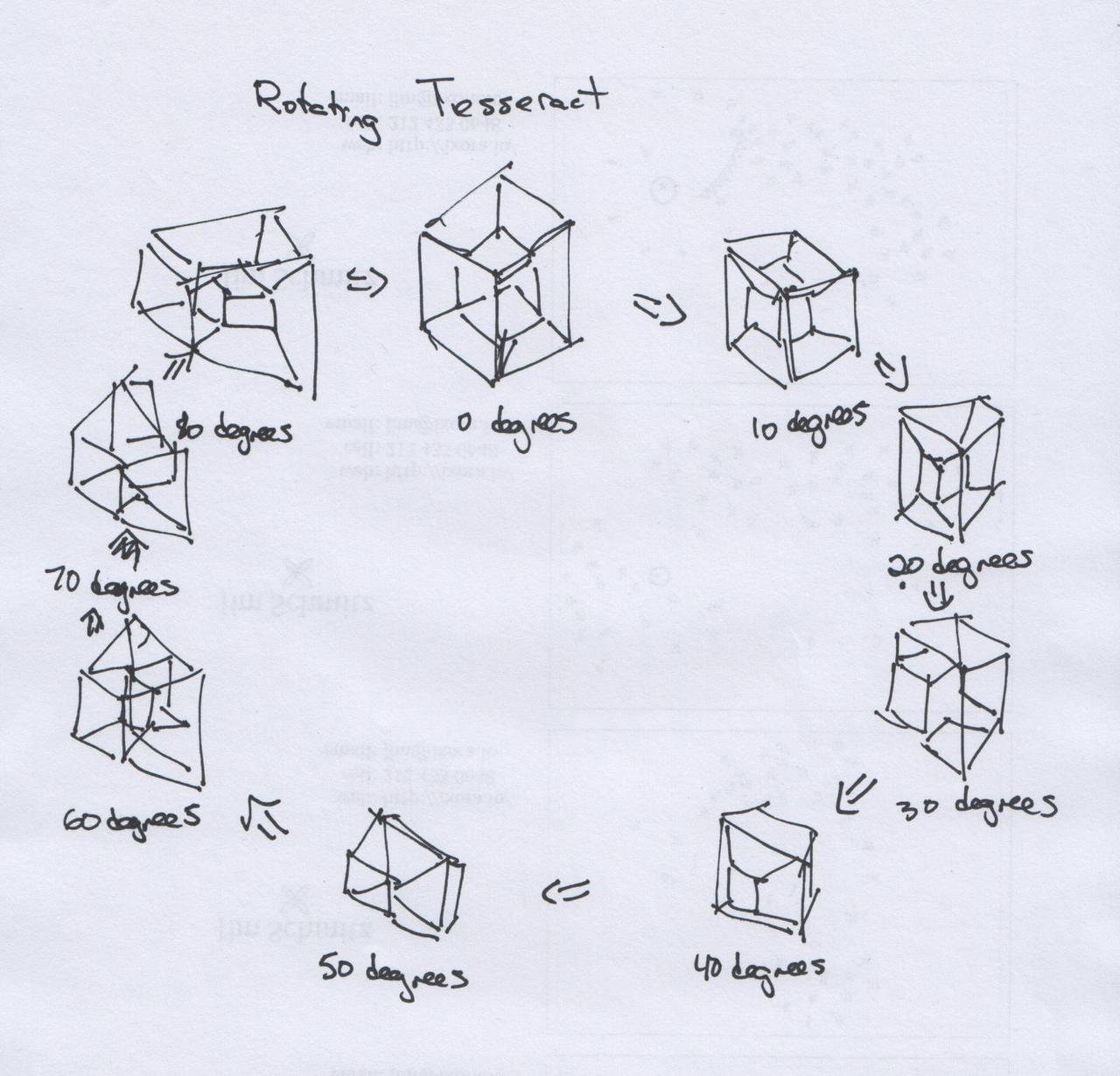 Equally important are the sketches of the equations behind this project. These are fundamental to my thinking this through and understanding what I am building.

The math behind a tesseract's design and fabrication seems complex at first but it's actually a fairly straightforward application of the math and concepts behind 3D computer graphics.

In a 3D world, objects have 3D coordinates that will be represented as a vector. The vector stores the object's position in the coordinate space relative to the \(x\), \(y\), and \(z\) axes:

For people who are familiar with the math behind 3D computer graphics: I am leaving out the homogeneous coordinate because it is unnecessary for what is being done here. For everyone else, be aware that the reality of how these are implemented for a more comprehensive application of 3D geometry will be a bit different from what is being discussed here.

This vector can be transformed by multiplying it by a rotation matrix. For example, to rotate \(\theta\) degrees around the \(x\) axis, multiply the vector by the appropriate rotation matrix:

Translations can be done by adding two vectors together:

Interestingly, in a more comprehensive application of computer graphics, translations are done with matrix multiplication and the homogeneous coordinate. That approach is important for more complex mathematical operations but is unnecessary here.

To do a perspective projection of a 3D object down to a 2D space (such as your computer screen), we need to map our 3D vector to 2D by dividing by the \(z\) coordinate, like so:

Think about what is happening here: objects with larger \(z\) coordinates are farther away from the origin and will shrink by a larger amount than objects that are closer to the origin. This is the perspective projection at work.

Again, for a more complex application this is handled differently but will not be discussed here.

4D geometry parallels (!) 3D geometry by using vectors to represent points. The 4th dimension is often referred to with the letter \(w\) but I will use the letter \(v\).

A rotation matrix can be used to rotate this around a plane. Note that in a 4D world, objects can rotate around a plane instead of an axis. Below I show the matrix to rotate a point around the X-Z plane.

As are perspective projections:

It is important to understand what this perspective projection is doing. It is taking a 4D object and projecting it down to 3 dimensions in the same way that a 3D object is projected down to 2 dimensions for our computer screens. Objects that are farther away in the \(v\) dimension will shrink by a larger amount. This is precisely what I am going to do to model a 4D tesseract in 3D space.

I highly recommend the book 3D Math Primer for Graphics and Game Development for a deeper intuition about the above math and the math behind more complex applications. This book was an excellent reference for this project.

To apply this math to a tesseract, start with vectors representing each corner of the tesseract:

Then multiply each by the appropriate 4D rotation matrix and translate in the positive \(v\) direction away from the origin. Each result can then be projected down to 3 dimensions. Those are the 3D dimensions of the tesseract that will be modeled in Rhino and eventually 3D printed.

I can do this repeatedly for many values of \(\theta\) and model all of them to visualize the tesseract as it rotates in 4D space.

That's all there is to it. If you understand these concepts as they are applied to 3D geometry, making the analogy to 4D space is straightforward.

After finding the coordinates for the corners of the tesseract for any \(\theta\) value, I can construct the object with spheres and cylinders for the vertices and edges.

To emphasize the perspective projection in the model, I want the vertices that are farther away in the \(v\) dimension to be smaller than the vertices that are closer. To model this, I scaled the size of the spheres appropriately. This means the edges must be modeled with truncated cones instead of cylinders.

As the illustration shows, the object can have noticeable edges and artifacts where the two spheres meet the truncated cone. It would be better if the objects were joined seamlessly.

This give a better result, but not without consequence. The tangent surfaces will cause boolean unions to fail.

Rhino provides a Python API for automating the construction of models and for creating custom commands. This is implemented with IronPython, the C# version of Python 2.7.

I modeled the rotating tesseract in Python code separate from Rhino. I did this because I wanted the code to be portable for later use with other modeling applications like Blender. The code produces data files that contain specifications for the vertices and edges of object to be built. The below datafile contains data for a simple cube.

I created a custom Rhino command called ConstructFromJSON that will read one of these files and build the object.

After completing the math and code I can finally create a proper drawing of the tesseract model. 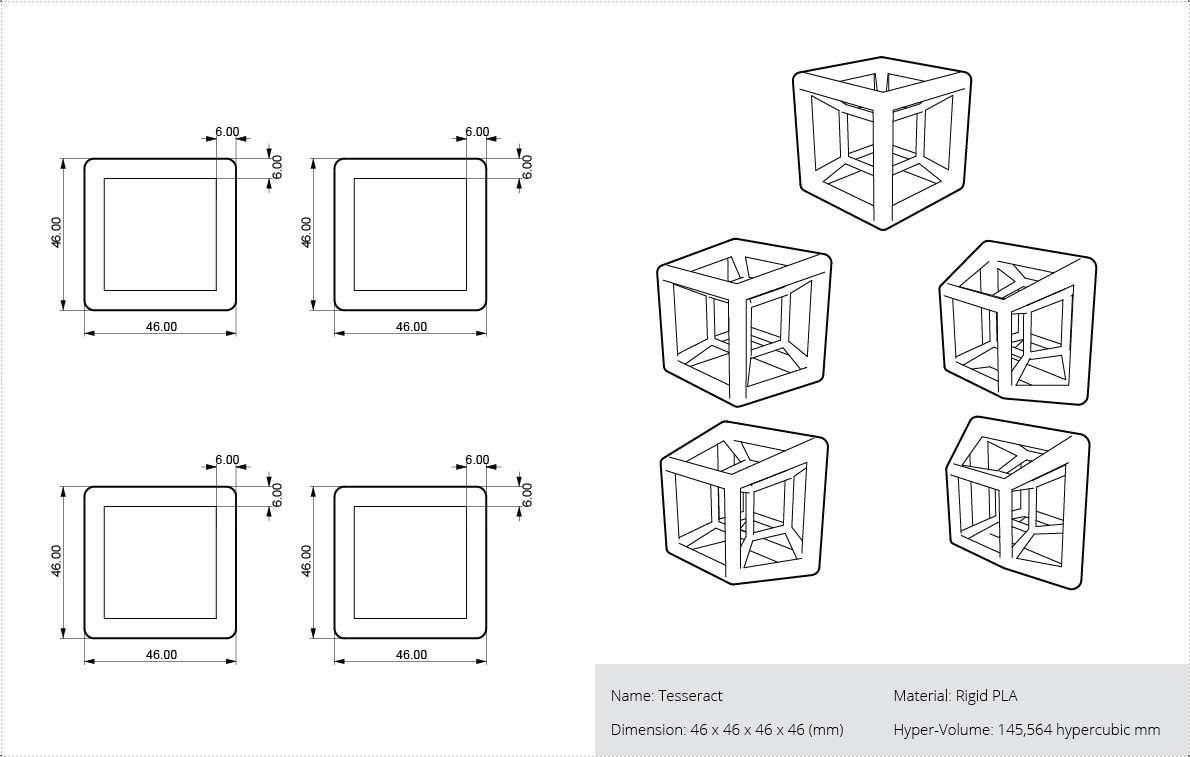 An Adobe Illustrator file is also available for download.

Using more Python code I can generate data files for many values of \(\theta\) and make a smooth animation. Rhino comes with rendering capabilities for generating the images for each frame of the animation.

My goal for this project is to 3D print many versions of a rotating tesseract and make a stop motion animation with them.

What values of \(\theta\) should I use for my 3D printed tesseracts?

I experimented with the previous Rhino animation code to visualize what a stop motion animation would look like for different \(\theta\) step sizes. I wanted the stop motion animation to be as smooth as possible without overburdening myself with an unreasonable number of 3D prints to make. I settled on a step size of 10 degrees and models with \(\theta\) equal to 0, 10, 20, 30 and 40. This also lets me benefit from the symmetry of a tesseract in that the 10, 20, 30 and 40 degree rotations are the mirror image of 80, 70, 60, and 50 degree rotations, respectively. And of course a 90 degree rotation is the same as no rotation at all. 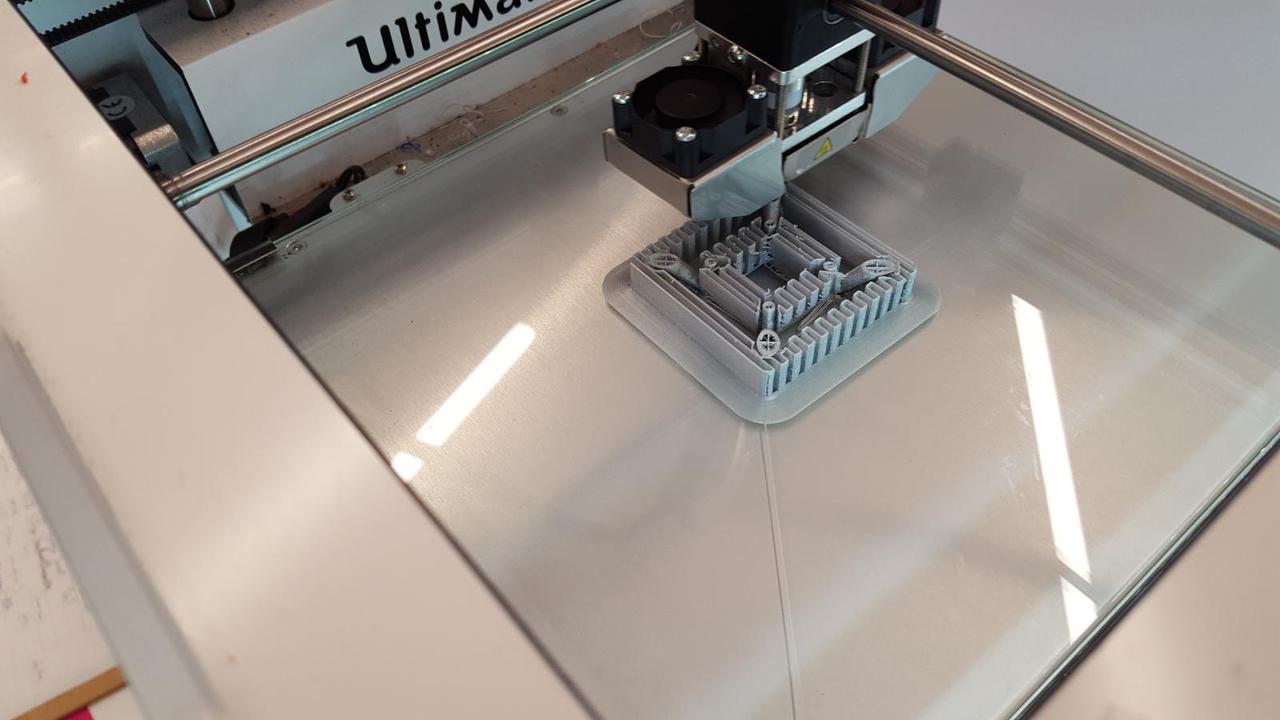 Each of the 5 prints took 3.5 to 4 hours on an Ultimaker 2+ with PLA material. Unfortunately, there were many failed prints. The total time spent printing was well over 30 hours. All of the successful prints were done at the Tandon Makerspace. I am grateful to have that resource available to me.

And finally, the stop motion animation of a tesseract:

And in animated GIF form:

Producing this was an enormous amount of work. It took 6 hours to film 18 frames. Still, it was a fun experience and I am happy to have worked hard to produce this unique visual exploration of a tesseract. 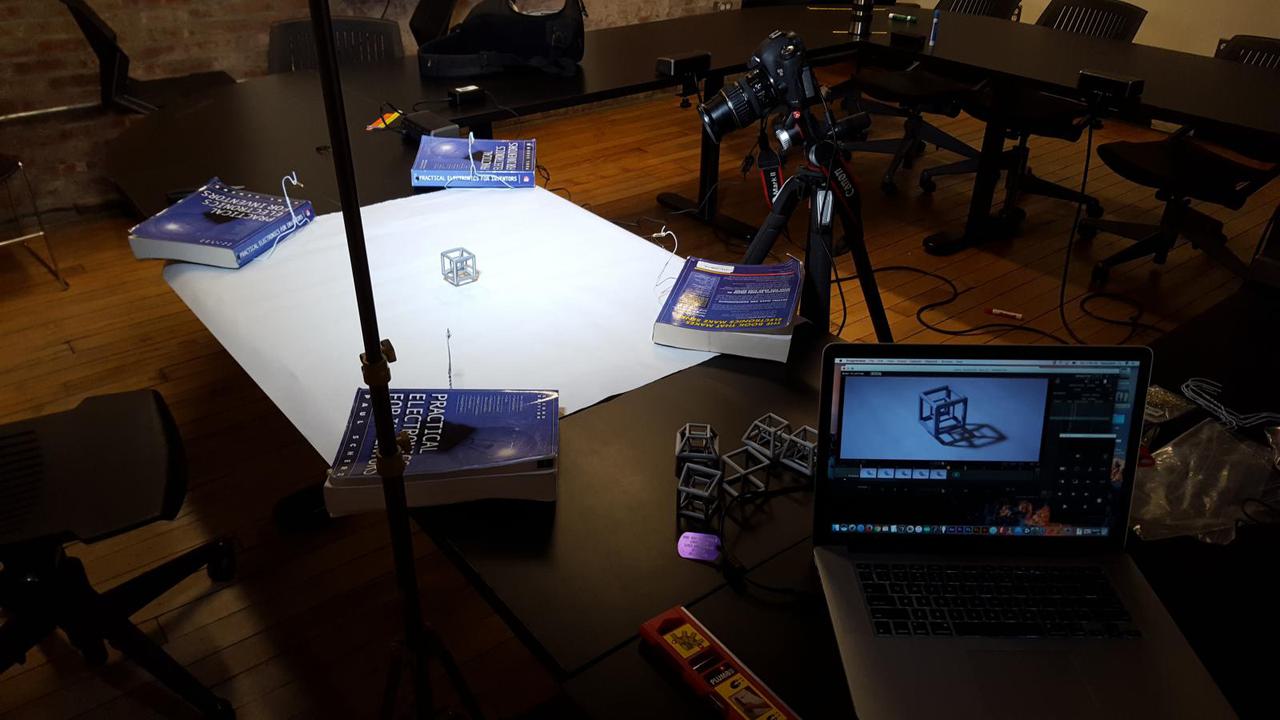 The tesseract models were photographed with a Canon Mark III camera while suspended with transparent polyester thread and bent metal hangers. I used Dragonframe to facilitate the proper photos.

This project isn't over. There is more for me to learn.

I wanted to print my models on the Stratasys Elite 3D printers at the Tandon Makerspace. Those printers are not free but have a much higher resolution and use support material that gets dissolved after the print is complete. They produce a much higher quality result. Unfortunately I ran out of time, but I will give it a try later this week.

I also want to try painting my 3D prints. I don't need all of these tesseract prints anymore so I can experiment on them to see how well I can paint a 3D print. The ability to paint a 3D print or apply a better finish would be valuable and make the color of the print material irrelevant.

I want to explore other modeling tools like Blender. Blender comes with more advanced rendering tools and is heavily reliant on Python programming. It is a good match for my skills and interests.

Finally, I want to make a more comprehensive video explaining this project and tesseracts. The animations I created above would be combined with a discussion of the math and equations.